Before Gerry, there was Barry.

When I joined the Brunswick Trugo Club, I became part of Gerry Strachan's team. But Barry was the first to take me under his wing and offer me pointers and encouragement. At that point, about two years ago, he was still fit enough to play the game, though it strained him. Mostly, he sat on the bench behind me and scrutinised my swing. He barked advice while smoking ("Fuck, you hit it too hard, mate!"), in a hoarse, gravelly voice that sounded like a sea lion. This past year, the effort of playing trugo was too much for him, but he attended the games and played cards with the others on practise days.

The competitive season over for now, I don't usually go to the clubhouse unless there is a special reason to. But a local community group had rented the facilities for a small event yesterday, and a few of us had been asked to help represent the club and explain the game to those attending. It was then I learned Barry had passed away about two weeks ago.

Somehow, I'd missed getting the message from the other players, and therefore the memorial service. That disappointed me, but it was an honest oversight. We'll miss Barry, but his mallet, labelled "BS" in block letters (Barry Smith), remains on the rack among the many others in the equipment room. He'll stay close.

Posted by Peter Sackett at 11:34 AM No comments:

There are two vegetable drawers in our refrigerator, and one of them is crammed with nothing but film. I brought it with me when I moved to Melbourne almost 4 years ago. I've been paring it down slowly. Film is expensive here, and a large portion of my stash is Polaroid, which isn't made anymore, so I tell myself these pictures need to count. But the expiration dates have now long since passed, and every day I don't use it the film chemistry weakens a little bit more. At this point, each picture is a gamble.

But that's okay, because the results can be interesting. Two days ago I pulled out one of my beloved Polaroid cameras-- a heavy, black-and-silver 250 Land model from the late 60s that, when collapsed, is shaped like a Claymore mine.  I noticed it still had half a cartridge of colour 669 pack film in it, probably loaded sometime back in 2006, or perhaps even earlier. I took it with me to trugo practice that afternoon and snapped a picture of Champ nosing around in the garden area behind the clubhouse.

When I pulled on the tab, I heard the familiar dull whistle of the film moving between the metal rollers; it's akin to the sound of a silk necktie slipping briskly through your fingers. A fraction of a second before coming free of the camera body, I could detect the faint pop of the developer pod bursting and, immediately after, a whiff of the photochemistry that would begin to reveal an image; it's a cool, drowsy scent of something undefinably appealing I wish I could eat. I have the same fondness for the smell of gasoline.

60 seconds later, I got this-- or at least something like it. I scanned the print and gave it a crude tweak in iPhoto to see what colours I could rescue, but clearly, red and magenta called it quits a long time ago. The print itself was even more blue than this. But hey, not bad considering that Polaroid would have classified the film as garbage.

I'm told the cross is a joke and that no one is actually buried there. The tripods are for tomatoes, which will be planted in the next week or so.

I'm not going to be nearly as stingy with this film as I have been. True, they're not making this exact stuff anymore, but Fuji now manufactures instant pack film that fits these cameras, so there's really no excuse for keeping it in the fridge. Time to use it.
Posted by Peter Sackett at 10:23 PM 1 comment: 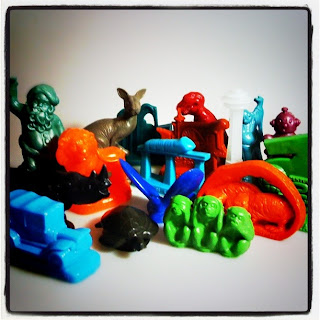 The remaining details of our New Zealand ski trip are awfully slow in coming, true, but I'll have to put those off just a little bit longer to document the recent arrival of a couple of important packages. The first showed up a few weeks ago, mailed to me by my friend Norm Bolotin-- a writer and historian in Woodinville, Washington, and owner of The History Bank. The second arrived yesterday, while I was out. It required a signature, and so I've just now retrieved it from the local newsagent. This package was sent by another friend, Diane Carlson, VP of Guest Services and Theater Programs at Pacific Science Center, in Seattle. Both boxes-- plain, brown and scuffed-- were filled with Mold-A-Ramas for my collection. Outstanding.

I'd gotten to know both Norm and Diane in the course of my research for my story about Mold-A-Ramas for Seattle Metropolitan. Though I don't name him in the article, Norm was the guy who recalled visiting the Seattle World's Fair as a ten-year-old boy, and riding around the fairgrounds with his father in a Cushman utility truck. He was great to talk with. Norm presides over an impressive collection of Century 21 memorabilia, including a large number of MARs, which he's slowly paring back to manageable numbers. Recognising a kindred spirit, he kindly offered to give some to me: kangaroo with joey, sea turtle (from the Lowry Park Zoo), Model T (Henry Ford Museum), rhinoceros (Milwaukee County Zoo), lion (Brookfield Zoo) and Santa Claus (unlabelled).

Diane's institutional knowledge was also invaluable to me, and she felt it was appropriate that Pac Sci's set of the six MARs originally vended at the fair come to live with me. These include the Space Needle, monorail, Hotei, three wise monkeys, the symbol of the Pavilion of Electric Power, and the Century 21 logo. As a super bonus, she included some MARs currently available at her facility: a butterfly, space robot, tyrannosauraus rex, the Yamasaki-designed arches of the former US Science Pavilion (now Pacific Science Center), and the extraordinary naked mole rats.

Thank you, Diane. They're in good hands!
Posted by Peter Sackett at 2:18 PM No comments:

On July 2, Anne, Bronwyn, Alison and I boarded a plane for Queenstown, New Zealand. I certainly didn't feel as though I'd "earned" a ski trip, but the plans had been made many months earlier by the other three, and I was looking forward to my first real stay in NZ. Prior to this, my only exposure to the land of the kiwi had been through concourse windows at Auckland airport, on the way to somewhere else.

The nerdier among you may be aware that Queenstown was a base of operations for a good deal of the filming of the "Lord of the Rings" movie trilogy. The mountains here are every bit as grand and rugged as they appear onscreen, and we were treated to a cinematic view as we drifted over them in a roar of white noise on our southeast trajectory from Melbourne. Slipping low into the range on our approach, the snow-covered slopes loomed in the porthole windows on both sides of the plane; suddenly, without the ability to see their peaks, they appeared huge but scale-less, and perilously close. I was reminded of a scene filmed in an entirely different climate-- at the edge of the Suez Canal in "Lawrence of Arabia" when Peter O'Toole gawks at the sight of a massive ship cutting through the desert.

The air was cold and clear when we landed, and from the tarmac we passed through the duty-free shop, for gin, and into the line for customs clearance. Anne's shoes, which bore traces of Australian mud, were momentarily confiscated for a good scrubbing by one of the officers. After picking up the rental car, we drove to the hotel to drop off our bags and then headed straight into town to pick up our pre-arranged ski gear.

Brown's Ski Rentals, though thronged with customers, was a crackerjack operation and had me outfitted inside an hour with some pretty sweet-looking gear. I just had no faith I'd know how to make it work. The one and only time I had ever skied was at Massanutten, Virginia with my friend Leigh Carroll, when I was 13. I made perhaps two trips down the slope that afternoon and I don't recall having particularly enjoyed myself. But I did still like the idea of skiing and was eager to learn.
Posted by Peter Sackett at 4:57 PM No comments:

In the days before this blog, I wrote a piece for Design Quarterly about Adam Reed Tucker's monumental architectural constructions in Lego blocks, then on display at the National Building Museum in Washington, DC. Over a year later, the exhibit is as popular as ever, and continues to appear on the museum's second floor.

Interested but can't make the trip? Read "Pixelated Paradise" from issue 40.
Posted by Peter Sackett at 1:03 PM No comments:

Splinters in the Mix

This is really more of a Twitter sort of thing than an actual post, but it relates to yesterday's first blog entry, "The Reminder". The New Yorker's Leo Carey and Ken Auletta have weighed in on what the proliferation of e-books may mean for the future not just of publishing, but for writing, and the nonfiction variety in particular. Yikes. There's a long preamble, so I suggest skipping ahead to about the 6:40 mark and starting from there.
Posted by Peter Sackett at 3:38 PM No comments:

I had a great time researching and writing a story about one of my favourite topics, Mold-A-Rama, for Seattle Metropolitan. "Souvenirs from MARs" is in their July issue, on newsstands now, but they've posted the full text online, along with some nifty animated GIFs. Mold-A-Rama made its public debut at the Century 21 Exposition during the 1962 World's Fair in Seattle. I'd latched onto this topic after getting to know a man named Bill Bollman, who collects and restores coin-operated vending machines. Since discovering these machines for himself, they've more or less eclipsed the rest of his collection.
Posted by Peter Sackett at 7:09 PM No comments:

Peter Sackett
Peter Sackett is an American writer, editor and actor. His work has been published in the United States, Australia and Germany. He lives in Melbourne, Australia.